Projects of the Document and Location Research Group

An overview of the variety of research projects that the group has led on and contributed to, illustrating the breadth and scope of our expertise.

Cian Oba-Smith’s Andover & Six Acres was the first book published by Lee Elkins when he launched his independent photography book publishing imprint Lost Light Recordings in 2018. In Andover & Six Acres, Oba-Smith explores the residents and landscape of the Seven Sisters area of North London, focusing specifically on the Andover and Six Acres estates, to present a more humane view of the people who live in estates that gained notoriety for crime and drug problems throughout the 1980s and 90s – a stigma that has clung to communities who still live there.

The project disrupts the easy representation of inner-city housing estates as an oppressive, dangerous and difficult environment to live within, portraying a real sense of optimism and intimacy from a community that is complex and nuanced.  The relationship between the portraiture and the landscapes creates a startling symbiosis; the shafts of light that fall across the austere concrete corridors echo the hopes of the residents who populate the estates.

Elkins worked in collaboration with Oba-Smith on every stage of conceiving and producing the book, from the early stages as editor sequencing the photographs, through designing the book, to close oversight of its production, to the final stages of binding the book by hand himself. It is an approach that has underpinned each of Lost Light Recordings subsequent books, and one that demonstrates the distinctive creative potential of the editorially-led publisher.

Borrowing its title from a chapter in Diana Taylor’s book, The Archive and the Repertoire: Performing Cultural Memory in the Americas (2003), Acts of Transfer is a project about returns, re-enactments, repetitions, and retellings. A collaboration between artist, Katy Beinart, and writer, Dr Lizzie Lloyd, Acts of Transfer documents and reactivates a selection of artworks from the past that contain elements of social engagement or public participation.

As the COVID-19 winter lockdown of 2021 eased, Lloyd and Beinart organised a series of visits to meet with nine artists and project participants to return to the site of a participatory artwork on which they had previously worked together. These encounters reflected on the experience of thinking about an artwork from the past, to consider its ongoing effect in the present, and how the feeling of these projects might be transferred in bodily, emotive, site-specific and non-verbal ways. Such sites visited included a bridge over the Avon River, community centres in Brighton, the site of an old coking mine near Sheffield, and a manmade forest near the Scottish border.

Key to Acts of Transfer was an interest in the complicated processes and relationships that are inherent in practices that rely on participation, and finding ways to communicate the feeling of being a part of such projects. The communication of this feeling is where the transfer of Lloyd’s and Beinart’s title comes in. By setting out to return either physically to the location of a previous artwork or to the metaphorical site of an artwork through conversation and memory, they sought to join the artist and participant in reimagining and partially reliving the work. Interestingly, despite their seeking out physical proximity and understanding, the artworks to which artists participating in the project returned remained like absent spectres in their own work.

The outcomes of the project include a series of short films, an audio work, photographs, drawings, performances, and texts, all of which embrace the imperfections of translating, not documenting, the original experience.

Days of Action is a series of works in progress that respond to and exposes latent forces within political, architectural and cultural locations. They bring the well-rehearsed moves of different spatial and social logics into productive tension to document and reveal what may be inherent or imagined within a place but typically lies unseen.

Within the series, movement is understood as a social, spatial and political act. Central to this understanding is the exertion of power – power to move and power over the movement of individual and collective bodies, whether this is exerted by a social group in pursuit of a common goal, or by architecture and its associated social codes and rituals that shape the choreography of everyday movement.

The works use formal motions to enact political devices, such as the artist enacting revolution as she spins back and forth within the curvilinear underground corridor of the Communist Party Headquarters in Revolution between two points, 2016, or use collective devices from civic resistance and direct democratic assembly to explore particular relations of ’them’ and ‘us’, ‘I’ and ‘we’, as in Solidarity line, 2018. This work enacted in Tate Modern used the bodily formation of the defence line that instead of defending territory became a transient line – a moving border, a living architectural element.

The term batman in the Pakistan Army dates from the period of the British Indian Army. In the Pakistan Army today, civilian personnel are employed in this role and are designated as Non-Combatant Bearer, meaning the batman is not a soldier or part of the fighting cadre of the army, but works only as a personal servant to each officer.

Photographed over a number of years in Lahore Cantonment – a military garrison district within the city of Lahore but under the independent governance of the Pakistani army – Huma Mulji’s photographic series, Dry Cleaners, brings to light the lives of ordinary people the artist encountered in her day-to-day life, who service the army officers.

In the Cantonment in Lahore, these Batmen continue to carry their masters’ dry cleaned and ironed uniforms, back and forth throughout the day. Holding the uniforms of military officers on their back, while walking next to their bicycles or riding on them, the images seem to be a quiet but poignant metaphor for a persistent social hierarchy: the emblem of the power and prestige on the back of these orderlies a signifier of how an elite class’ inheritance of the legacy of colonialism conspires with societal forces to reinforce systems of power.

If you opened the local newspaper in the small New England town of Amherst, Massachusetts, as Schuman did one day, you might find a section entitled “Police Reports” – succinct and extraordinarily anticlimactic accounts of crimes, suspicious activities, events and non-events reported in the area during the previous week.

In SLANT, Schuman interweaves a selection of these clippings published between 2014-2018, with quietly wry photographs he made within a thirty-mile radius of Amherst from 2016-2018, in response to their unintentionally deadpan descriptions. What began as a genuinely affectionate, tongue-in- cheek take on the small towns where Schuman spent his childhood steadily came to reflect the disquieting rise of “fake news”, “alternative facts”, “post-truth” politics and paranoia in America following the 2016 election.

Aaron’s subtly offbeat combination of images and words, however, was always inclined to create a foreboding sense of unease. In SLANT, the relationship that has been constructed between photography and text takes its inspiration from a poetic scheme called ‘slant rhyme’, notably espoused by the nineteenth century poet, Emily Dickinson, who also happened to live and write in Amherst. In such a rhyming scheme, “there is a close but not exact correspondence of sounds, often using assonance or consonance; generally it is used in poetry to give variations and an inharmonious feeling.”

Appropriating this literary device to similar but alternative ends, SLANT serves as a wider reflection upon something strange, surreal, dissonant and increasingly sinister stirring beneath the surface of the contemporary American landscape, experience, and psyche.

Hayes’ Storage explores the secret life and unintentional narratives of the non-public spaces of major museums across Europe. The composition of Hayes’ images, their peculiar lighting and juxtapositions, conspire to make us question whether her images are purely documentary in nature or contrived stagings composed for the camera.

Storage began when Hayes gained the opportunity to record the Natural History archival collections from the National Museum in Prague when on a residency in the city in 2004. The objects were being transported from their long-term city centre home to an out of town, purpose-built, storage facility. Hayes was able to slip as an interloper into this flux to capture the transitional spaces and relationships created between origin and destination.

Over a period of almost 15 years, Storage has explored other museums’ non-public locations, including the labyrinthine archival departments of the Natural History Museum, London. Despite the different idiosyncrasies of each institution, the spaces Hayes interrogates in Storage are always incomplete and invisible to public observations. The objects wait for us in these supposed non-places, anticipate, and reflect on their own condition. Or are just piled up on top of each other, inert, until they are granted a role in public again.

Dr Ricketts’ The Vessel shared the story of the UK’s only prison ship of modern times, Her Majesty’s Prison The Weare. Like its subject, the artwork The Vessel was an assemblage of diverse components, and has had several different iterations, ranging from a performance on a cliff top overlooking a former berth in Portland Port to a film and exhibition of artefacts detailing the artist’s attempts to access, photograph and track this barge, and explores the strange status the vessel has developed over its eventful life. The Vessel’s offshore status and questions of legality and visibility are central to the project.

Decommissioned in 2005 and for several years located in Portland Harbour (Dorset, England), the vessel, now known as Jascon 27, was last known to be home to five hundred oil workers in the Niger Delta. The project’s film took the audience from Sweden to the Falkland Islands, from Germany to Manhattan, and involved engineers, ship spotters, prisoners, soldiers, and the artist’s brother, Chris. Composed entirely of appropriated material, Dr Ricketts’ film was framed in an exhibition using sections of television news footage about the vessel, ephemera and a small curated display of other artists’ paintings of the prison ship, specially loaned for the exhibition.

Together, this interwoven set of personal artistic studies and sightings of the barge in popular media portrayed the vessel not simply as a dumb container for the pragmatic housing of men but as a peculiar object of fascination for artists, journalists and enthusiasts that has grown in both intrigue and a peculiar potency the more we scrutinise its mute exterior. 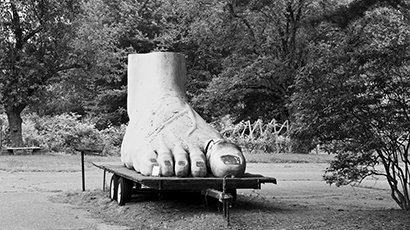 Document and Location is a research group developed by academics working across multiple disciplines.

About the Document and Location Research Group

Find out about the Document and Location Research Group.

Ways to contact the Document and Location Research Group.

Writings commissioned by the Document and Location Research Group

Essays commissioned by the Document and Location research group at UWE Bristol.