Putting Bristol on the map as a City of Film

From celebrating Bristol’s filmic credentials to highlighting the role of freelancers in the creative industries, UWE Bristol research has boosted the city’s cultural and economic health. So much so that UNESCO was inspired to designate Bristol a City of Film.

University experts in filmmaking, creative enterprise and cultural production led a series of projects that explored the Bristolian roots of Hollywood actor Cary Grant, analysed Bristol’s development as the UK’s third largest film and television production centre, and documented the role of freelancers in television and film. In October 2017, Bristol became a UNESCO City of Film. This bid, led by Bristol City Council, was initiated by Dr Charlotte Crofts in 2014. One of the key outcomes has been the Council’s £50,000 commitment to cultural activity and four years of funding from the Paul Hamlyn Foundation for a film literacy project across Bristol, Belfast and Bradford.

The UNESCO designation was pivotal to Channel 4’s decision to locate one of its two regional hubs in the city, a decision that was based on UWE Bristol’s Go West: Bristol’s Film and Television Industries, written by Professor Andrew Spicer and Dr Steve Presence. This research report drew on survey data and interviews with company executives, to demonstrate Bristol’s strengths as the UK’s third largest centre for screen industry production. It revealed the centrality of the BBC’s Natural History Unit and Aardman Animations, which had stimulated a vibrant cluster of over 160 independent screen producers. The study recommended the need for a coherent screen strategy to lobby policy makers and government to provide greater support for the industry.

Further impetus for policy change was provided by Dr Amy Genders’ research into the role of freelancers in Bristol’s screen economy and culture. Dr Genders demonstrated the precariousness of freelancers and their invisibility in economic analyses, resulting in their being ignored in policy decisions. Her research not only changed perceptions of freelancers as an “invisible army” integral to the industry, but was also put forward as evidence to the House of Lords Communications Select Committee by The Indie Club, an advocacy pressure group for independent producers and freelancers. This prompted calls for freelancers to be recognised as a vital workforce.

The Watershed, the South West’s leading film culture and digital media centre, also benefited from the UNESCO designation, which it used to secure funding and international support, while UWE Bristol research continues to inform the Council’s wider cultural policy. 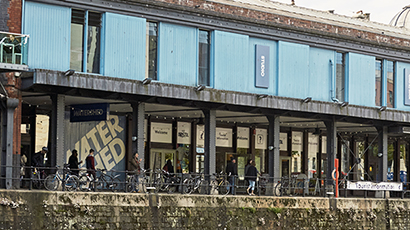 The Digital Cultures Research Centre (DCRC) is a loose-knit, collaborative and anti-disciplinary network of researchers distributed across UWE Bristol.